DOVETAILS and BEYOND: FINE WOODWORKING at the MAINE STATE PRISON

The story behind these photographs takes place inside the Maine State Prison, but it's not about prison life or criminal justice. The inmates are involved in a woodworking class taught by a master craftsman, but the story is not about technique or artistic vision.  You might say that this post is about a place  in which there are no stories- a time for respite from the past and the future, along with all the affiliations and tensions of being Inside.  Each Sunday, selected  inmates participate in the Fine Woodworking Program led by Furniture Master Brian Reid .  For a few hours, they focus on making beautiful and functional things from wood, by hand. 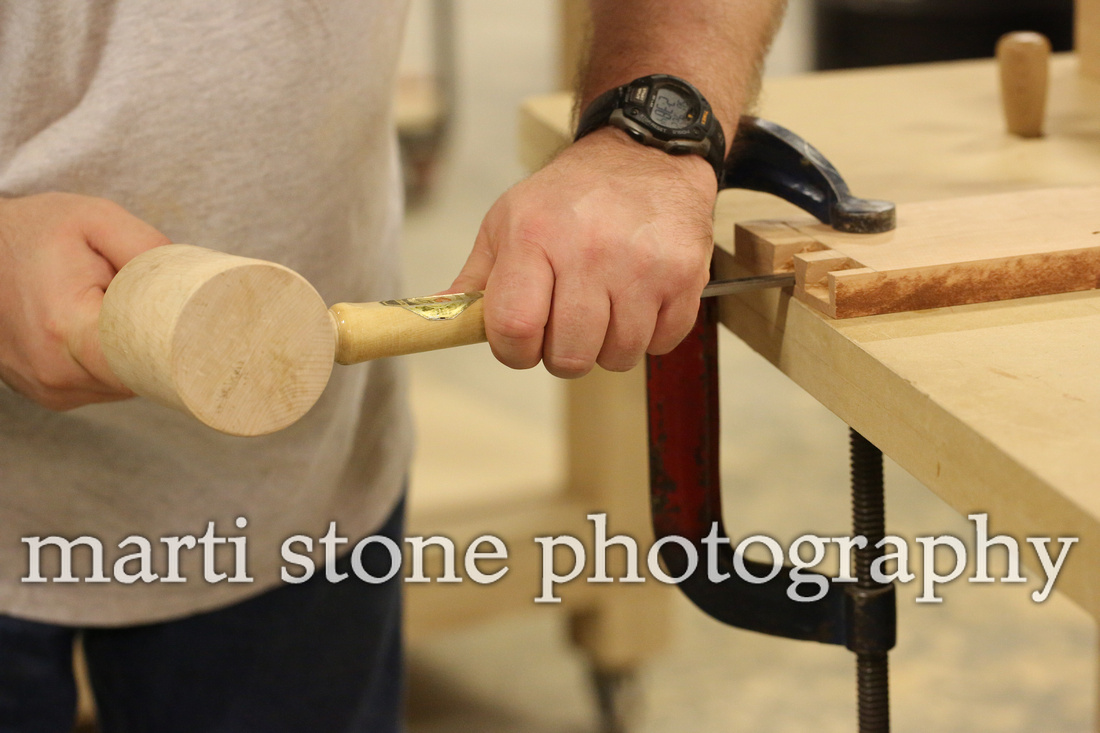 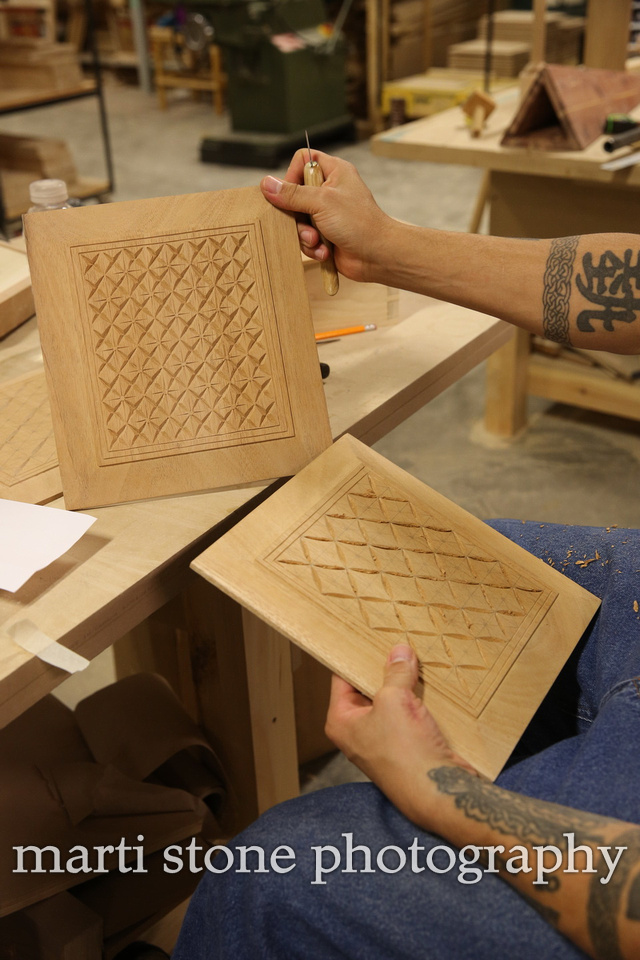 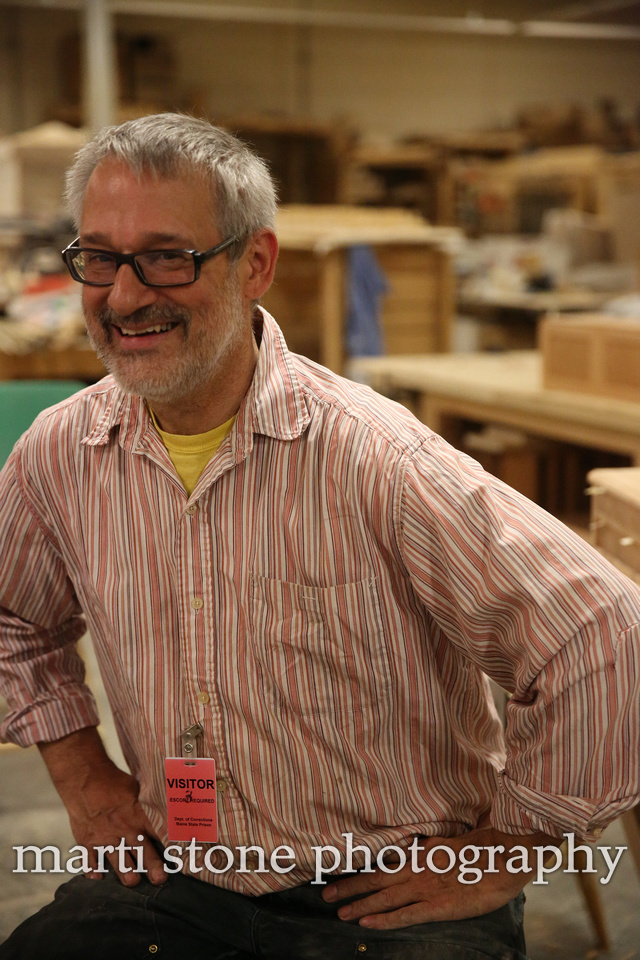 Reid is a longtime instructor at the Center for Furniture Craftsmanship in Rockport. The curriculum that he developed for this program  is modeled on a similar program in the New Hampshire prison system and involves aspects of his work at CFC.   Follow the preceding links for much more information  about the process involved in this volunteer endeavor. 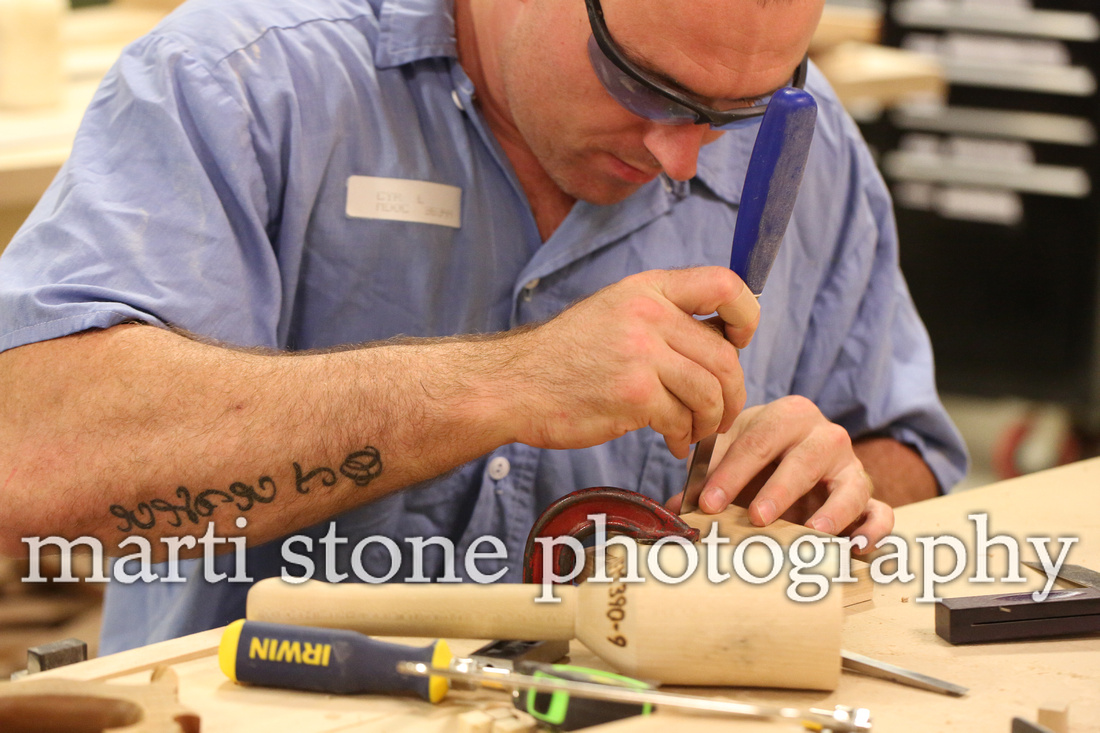 Brian asked me to come in for an afternoon session  to get some images for future publicity about his program. Yes, he'll probably be asking you or your organization for money at some point, and it's going to be hard to say no after you see how much time and talent he and his team donate.

I didn't give the specifics much thought until the day for the shoot arrived.  I am so accustomed to working in varied environments, with people of all ages, that I know how to respond to just about anyone or anything.  Other than supplying personal information for a background check in advance, this was much the same.   It was just as we were passing through the various security points that it occurred to me that I'd never actually been inside a prison, even though I've known plenty of people who have been on both sides of the law. 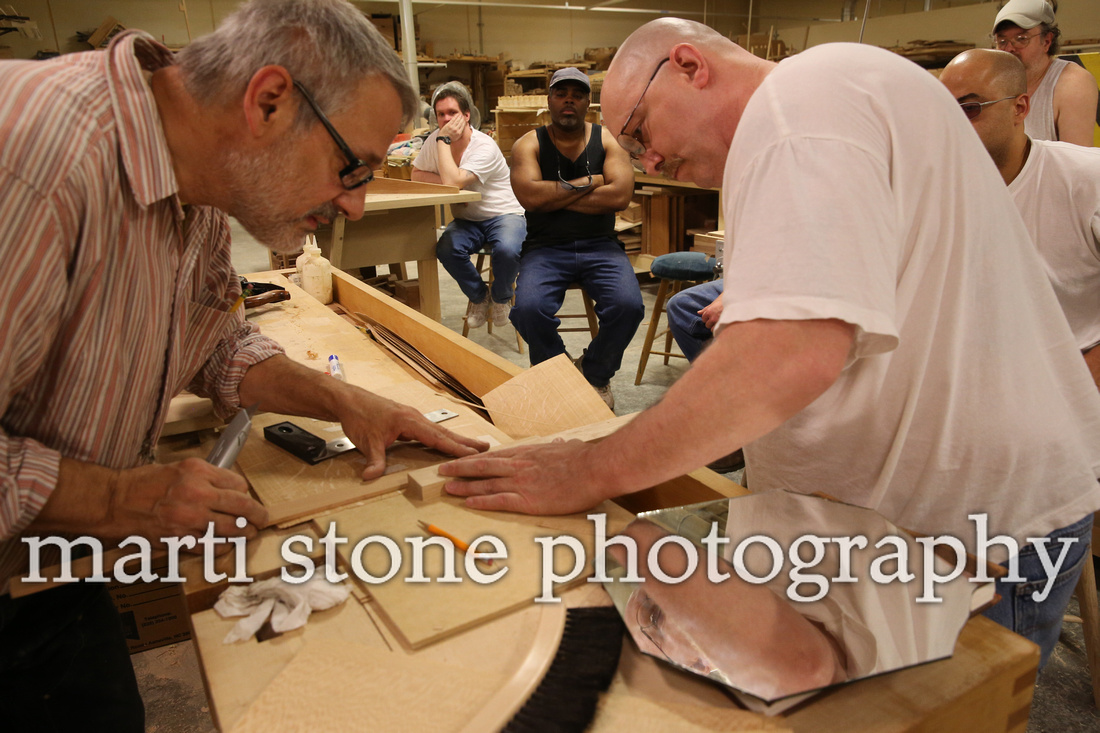 My experience there was predictably uneventful.  Yes, I drew a few stares as I passed through the more public areas, but that was about it.  Once in the shop, I started working in my usual manner, talking to the individual inmates as I went along.  They had all agreed to be photographed and to allow their faces to be featured.  I knew that they wanted to stay in the program and had far too much to lose to bother to cause any trouble, and I got nothing but cooperation and an eagerness to show me their work.  So everything went smoothly until someone (not me and not  the inmates or staff, so you figure it out) accidently pushed his emergency button.  A swat team appeared in record time, asking "where is she?".  I just held up my camera and said "I'm right here and I'm fine".  That was it.  As I said, no stories.  After a couple of hours, I had looked at the situation from every angle and I knew I had more images than Brian could possibly use.  I was finished, but the class still had 90 minutes left. It was a beautiful fall day outside and my dog was waiting for a walk, but I knew I wasn't going anywhere. Short of a major emergency, there was no reasonable way for me to leave my own photoshoot.   It was an odd feeling, even for that brief amount of time. "Sorry about your incarceration", Brian said.  So I just kept watching, knowing full well that I wasn't understanding much about prison or woodworking, but that I was seeing something a bit beyond both worlds. 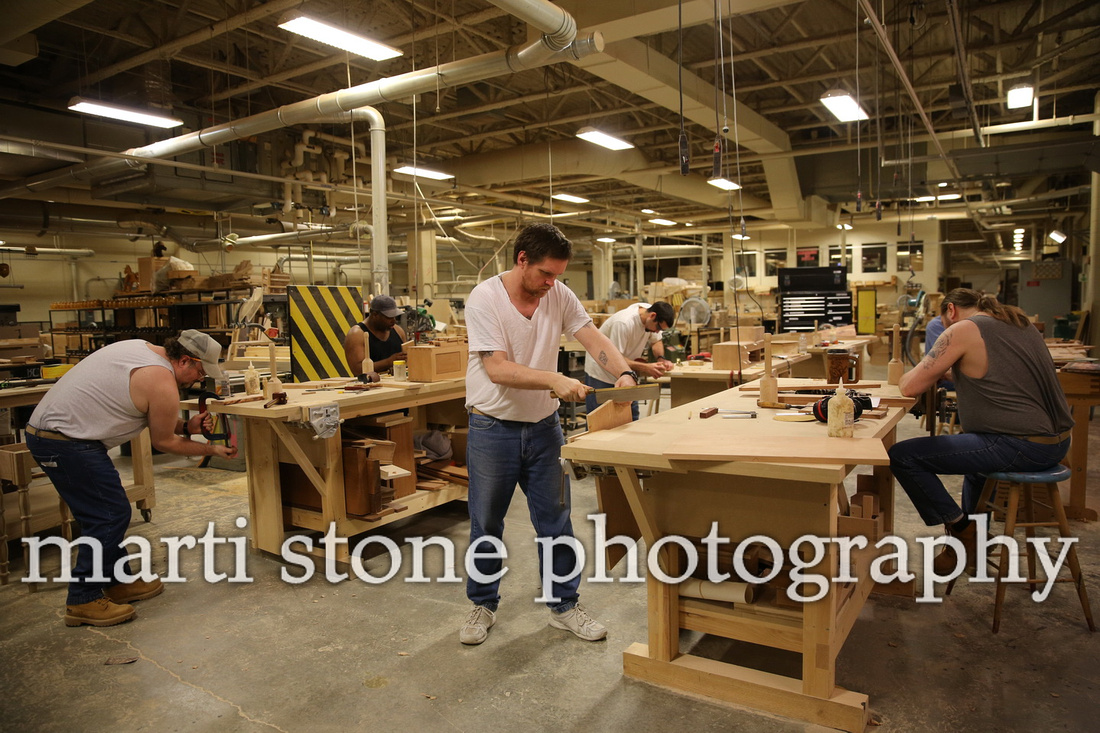 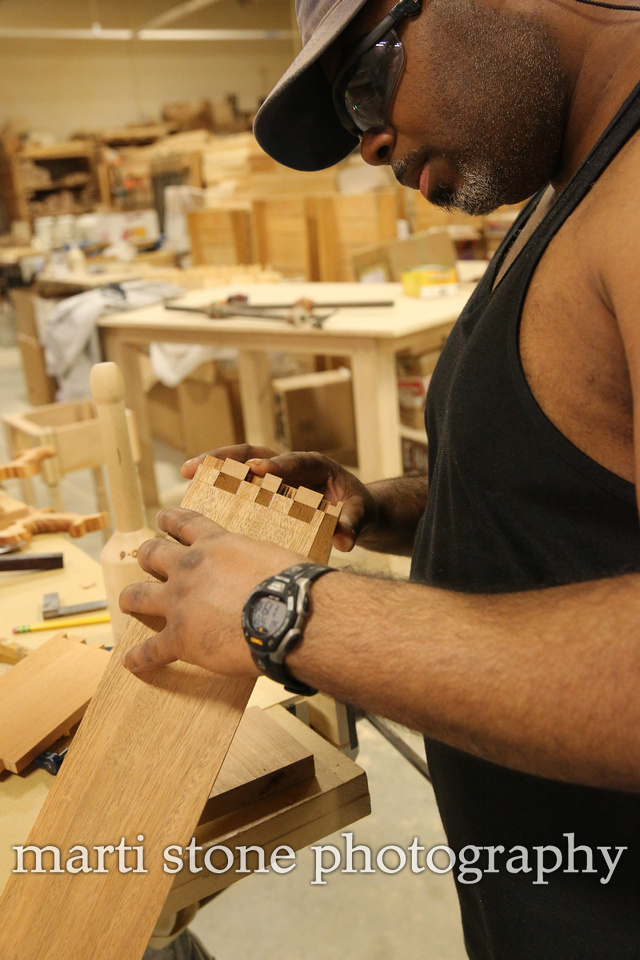 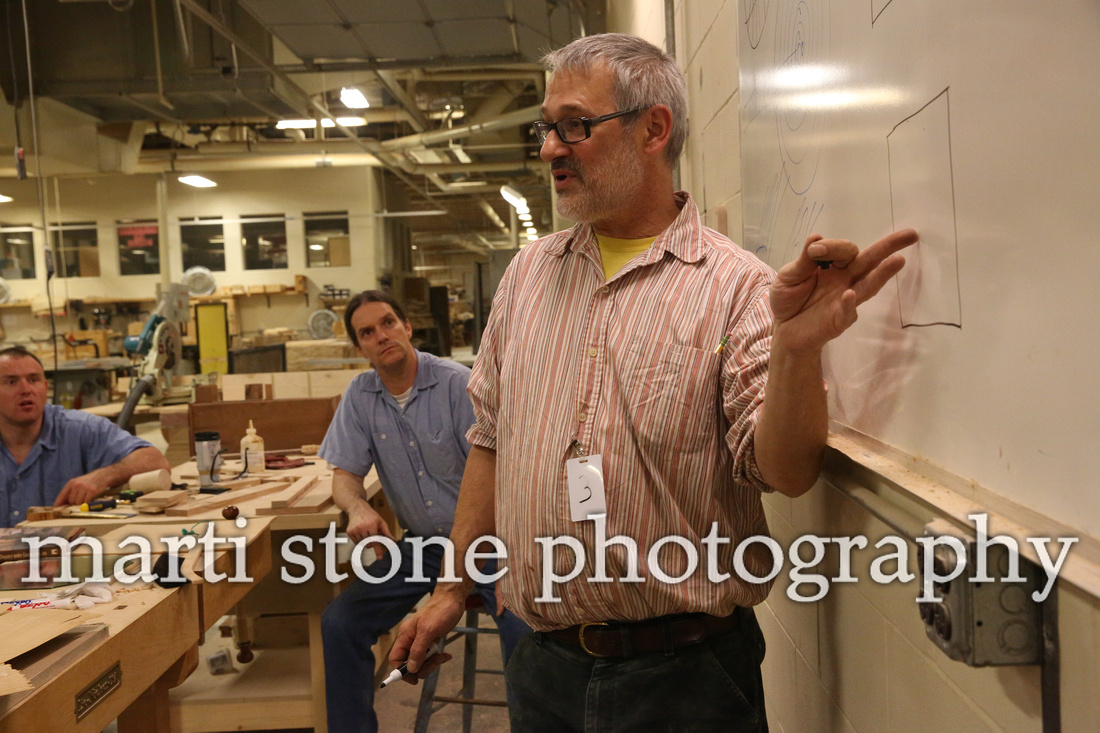 Class runs for about 7 hours on Sunday and is a mix of lectures, demos, and individual consultation. 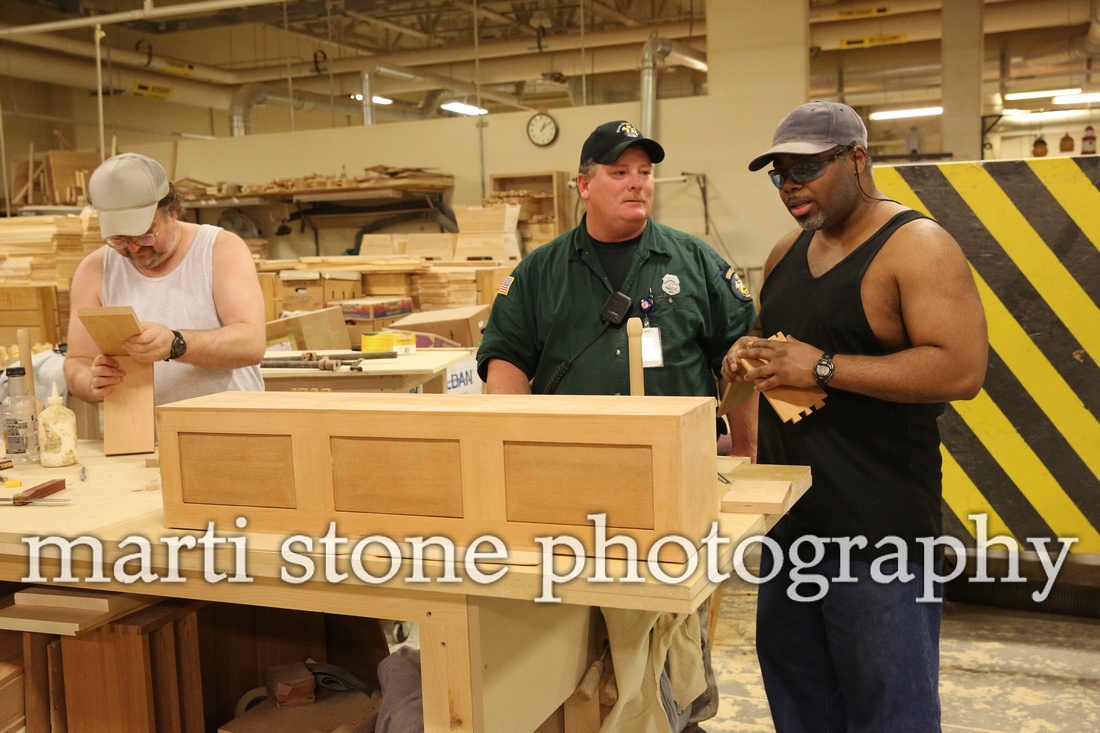 Students must earn the right to participate. On Sundays they frequently miss the football game on tv in order to attend class. They get the score from a staff member when he stops in on rounds. 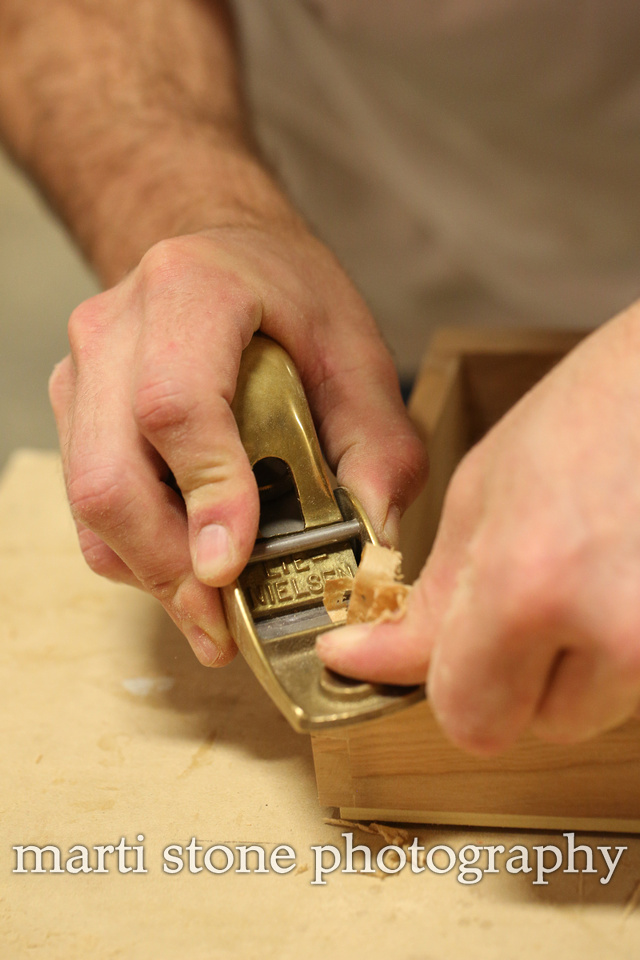 Lie-Nielsen Toolworks, another midcoast gem within the woodworking industry, donated the majority of the handtools to the program 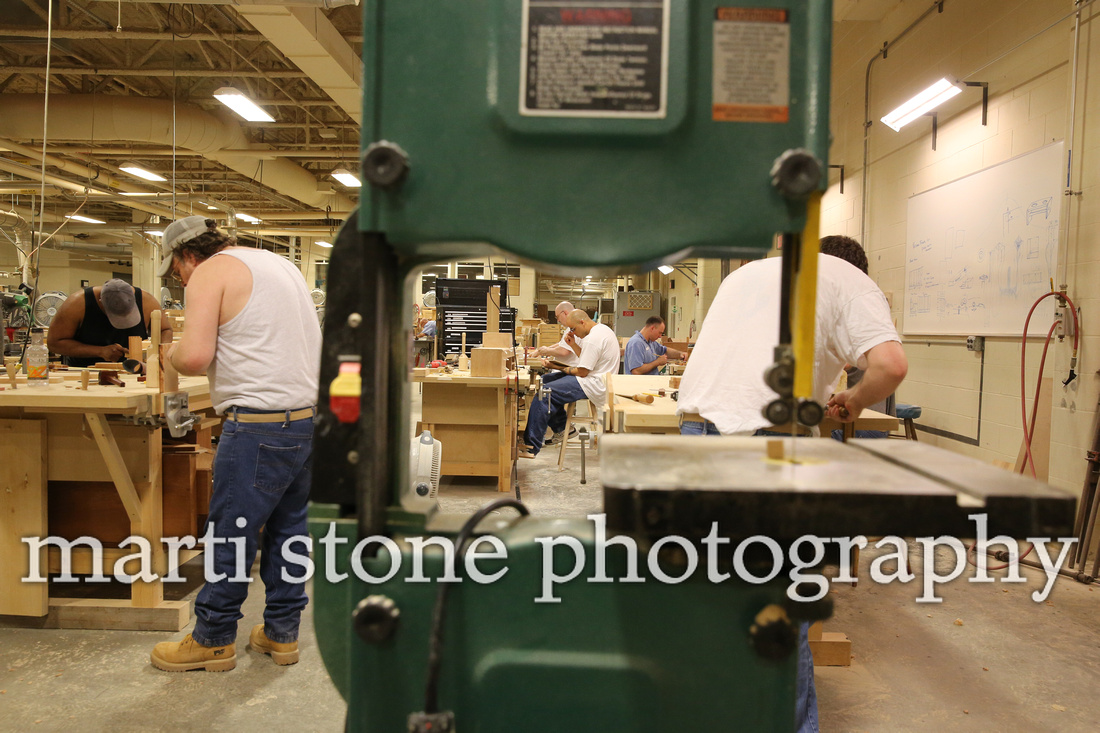 Larger tools were donated as well 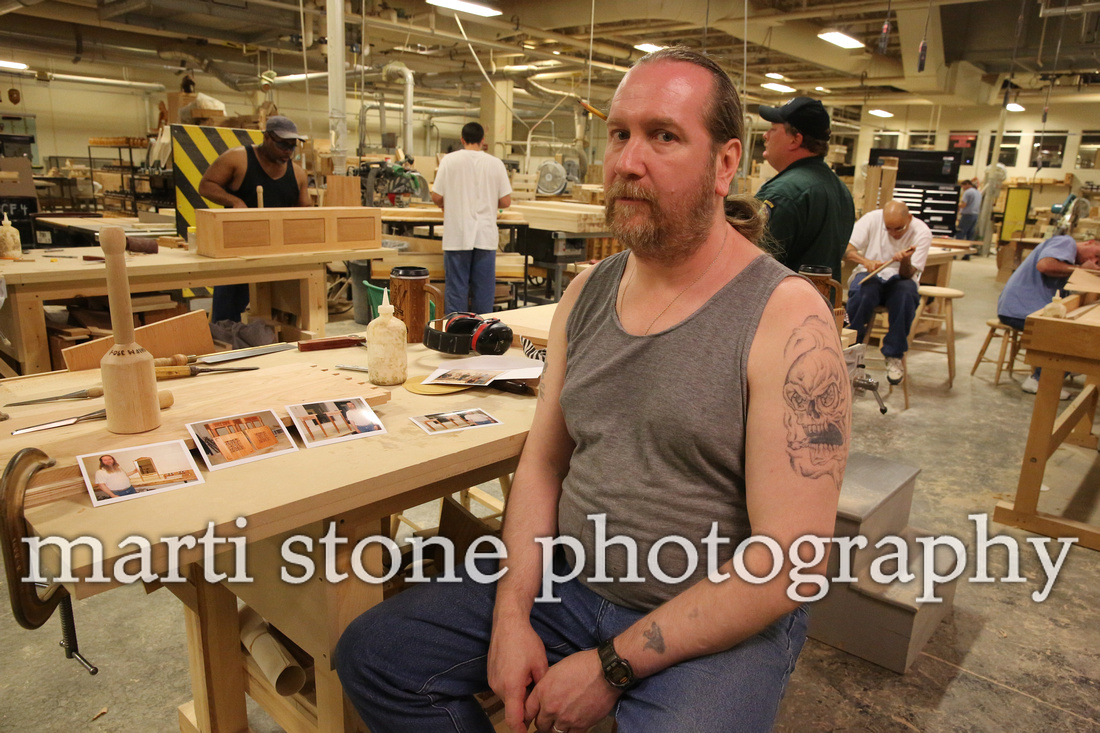 A student shows me photos of his previous projects.  Some of the finished pieces are shown at The Gallery of Somes Sound, a sponsor of the project. Other pieces will be displayed in a special section at the Maine Prison Store in Thomaston.  Proceeds from sales are primarily used to buy additional tools and materials for the program. 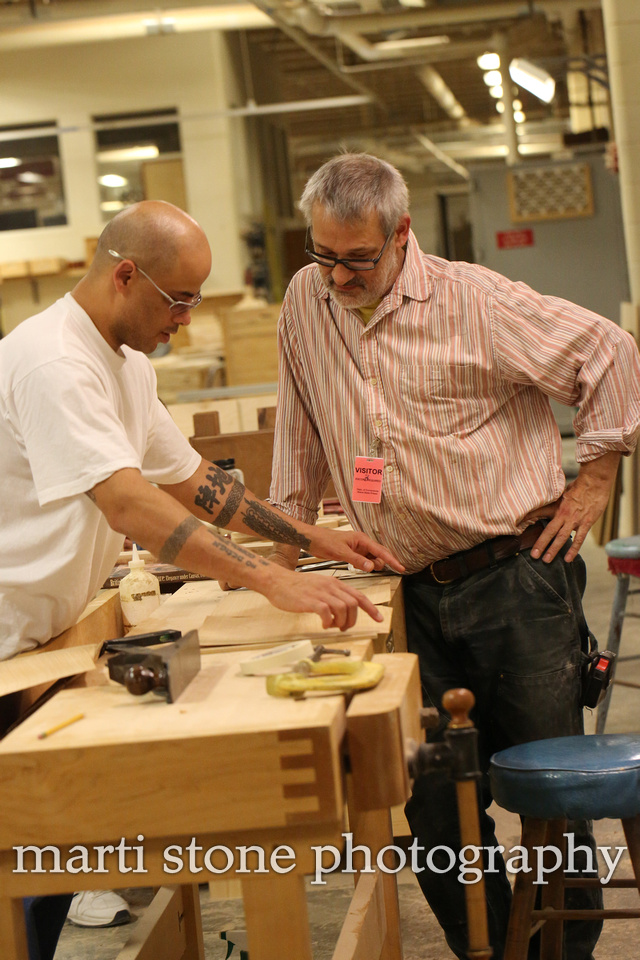 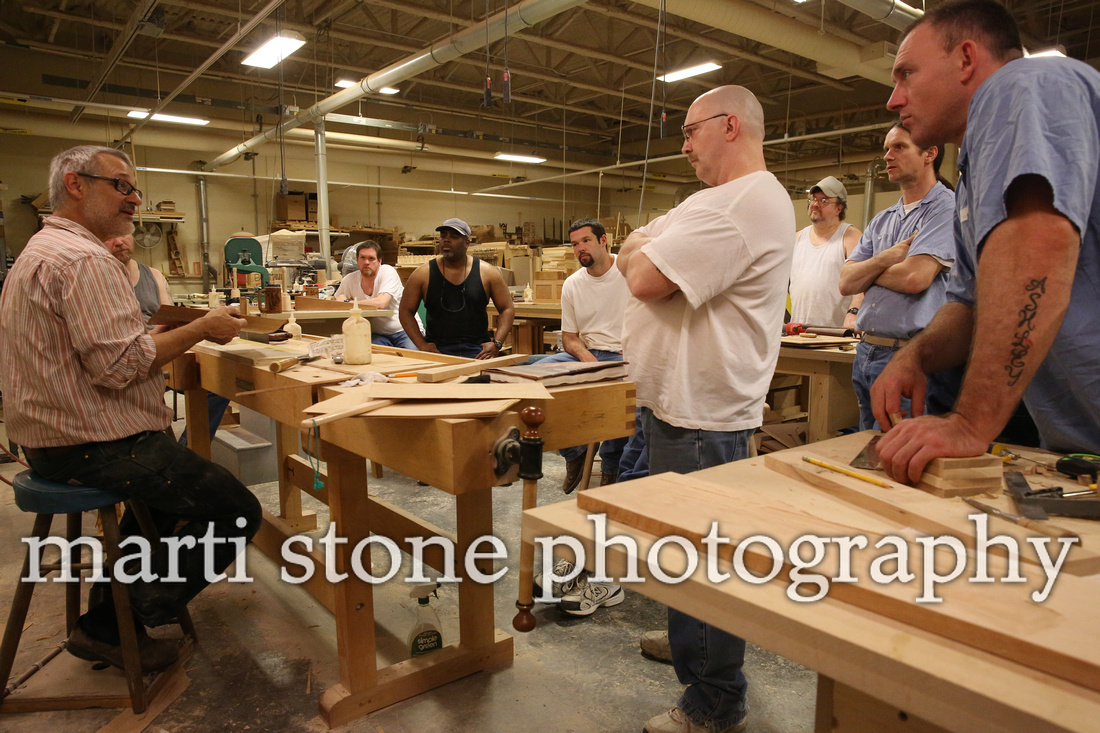 Beyond being an internationally recognized artisan and designer, Brian Reid has some special attributes that make him an effective teacher, whether the students are in prison or not.  He easily engages, but he leaves enough space for the student to find his own way.  He has high standards, but he's non-judgmental.  He is skeptical, but he honors tradition and history. He's practical and tells it like it is, but he's enough of a dreamer to think that prisoners are part of humanity and  have something to offer to themselves and others.

Jeff
http://www.printradiant.com |http://www.printlinkage.com | http://www.hitsticker.com | http://www.stickermac.com | http://www.australiacpd.com
Andrew Klimacki - Belfast Northern Ireland(non-registered)
Brian, what amazing work you are doing with the inmates at Maine prison. Even if half the time is only 'chit chat' with the students you are providing a greater positive contribution to society then I will ever do. Well done my friend and your own work is lovely to see as well. Our time at Parnham was truely unique and the many varied career paths taken by past students is a testament to John Makepeace, our guru Rob Ingham and the greater student body. This is a kick in the pants (ass, I think it is, in your neck of the woods) for me to take up that suggestion for a similar programme run by the Quakers here in Northern Ireland. For the sake of those on the inside, keep up the good work. 10/10 mate.
Jane Whitney(non-registered)
Beautiful and amazing pictures of an amazing teacher and beautiful man. These men are privileged to have Brian as a mentor as was I. You learn many positive things under Brian's watchful eye and not just about woodworking. No matter what the setting or the life circumstances woodworking with Brian changes one for the better. I hope the program continues and the students grow, turn out beautiful work and have fun as well.
The Gallery at Somes Sound(non-registered)
Marti - What a great job! Thank you for this amazing piece to spread the word about this program...Brian Reid is an accomplished furniture maker who not only devotes his life to furniture making but gives back in sharing his experience and passion of furniture making to others who are less fortunate. The students deserve a chance to live productively once they are released. They are paying their dues and will need a trade to make them employable - so they do not return to where they came from...the Prison Outreach Program is making this possible - Brian and the other volunteers of this program are a gift. Thanks again Marti for sharing this inspiring piece of work -
(Tyra Hanson)
Robin Macgregor(non-registered)
This is so inspiring -- what a great opportunity and amazing photos! Well done. Thanks for sharing, Marti!
No comments posted.
Loading...
Subscribe
RSS
Recent Posts
CINDERELLA: It's not all wishes and princesses "FOR WHAT IT's WORTH" a performance showcase on North Haven TOXIC HOT SEAT: Will You Take a STAND? TAKEAWAY from the CLASS A MAINE STATE DRAMA FESTIVAL SCENES from the MIDCOAST REGIONAL DRAMA FESTIVAL NO COLD FEET: BAY CHAMBER CONCERTS presents SONGS OF SOLOMON GOSPEL CHOIR DOVETAILS and BEYOND: FINE WOODWORKING at the MAINE STATE PRISON A BACKSTAGE FAIRY TALE: SHREK PART 2 A TREK THROUGH SHREK TECH SHIVER ME TIMBERS
Keywords
performing arts Maine theater portraits schooner weddings drama Camden Hills Regional High School musical theater arts
Archive
January February March April May June July August September October November December
© Marti Stone Photography
Powered by ZENFOLIO User Agreement
Cancel
Continue